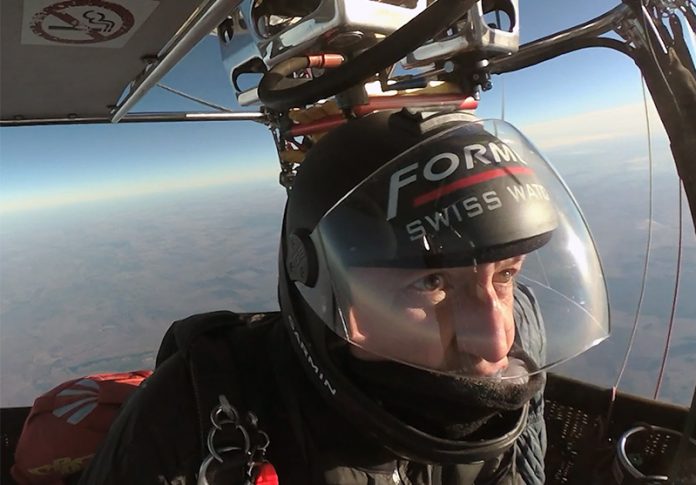 In a remarkable feat of bravery and skill Swiss entrepreneur and skydiver Marc Hauser has become the first person to make a free fall jump into the Jet Stream, the high altitude winds that whip around the planet.

Wearing just a normal skydiving suit and with a limited oxygen supply Marc leapt from the balloon at a height of 7,400 meters in -40 degrees temperatures into a 137 kph jet stream. Flying at a near 45° angle Marc reached a top speed of 270kph at 5,600m before deploying his parachute at 2,000m and landing at a farm near Forbes, 290km west of Sydney, Australia.

In free fall he covered a horizontal distance of 5.9km/ 3.66miles

“It’s a huge relief to have turned my vision of a jet stream jump into reality.
The complexities were enormous. So many factors had to fall into place at exactly the right moment, starting with the weather, the flight clearance and the availability of an extraordinary team. Every single one is a world leading expert in his field and was essential to minimize risks in this extremely hostile environment” Marc Hauser.

The jump was intended to highlight the untapped energy in high altitude winds that have the potential to supply large quantities of wind power. Later this year, BBC World News will air a documentary on Marc’s jump and the fascinating science behind high altitude winds and the attempts to harness their energy.

Made by award-winning documentary filmmaker Claudio von Planta, the documentary crew has tracked Marc on each step of his journey discovering the technical obstacles he had to overcome as well as exploring the cutting edge science behind high altitude wind generation.

“From the beginning i was keen to combine my passion for flying with a higher cause. I am convinced there is huge potential to solve many energy issues with better and smarter use of wind power. Hopefully my jet stream record will draw attention to these ideas and lead to more engineering inventions” Marc Hauser.

Marc had also been hoping to break his own world record for the fastest ‘speed tracking’ flight of 304 kph. However, technical issues in the balloon forced an earlier than planned exit. The additional tail wind in the Jet Stream should have powered Marc past his earlier World Record set in 2012.

Marc was not wearing a wingsuit in either of these jumps. Watch BBC World News interviewing Marc Hauser.

Watch Claudio von Planta teaser of Marc Hauser for CHASING THE JET STREAM, which was released earlier this year on BBC Television.

You can now watch CHASING THE JET STREAM online on Dream Racer TV.

Imagine satisfying the energy needs of the entire planet with HIGH-ALTITUDE WIND POWER. It is possible. Even Bill Gates believes it could be the ENERGY MIRACLE that meets global electricity demands.

Chasing the Jet Stream explores and use this miracle to establish a horizontal skydiving speed record of up to 200mph (320 km/h) at the jet stream altitude of 33,000ft (10,000m).

Help shape the future by supporting our pioneering mission and let us promote wind power with a visionary film.