Jim Martin of Adventure Rider Radio speaks with Christophe Barriere-Varju about the recently released National Geographic film, Riding Morocco: Chasing the Dakar, that has been broadcast across 170 countries.

Listen Christophe talks about what went on in Morocco, how this NatGeo production compared to his 10 times award winning film – Dream Racer. How Laura Csortan a former Miss Universe, Miss World and Miss Australia came into the picture and how she dealt being on a Honda Africa Twin 1,000cc having never ridden on dirt before – as well as some useful tips on training the unconscious mind to better ride a motorcycle. 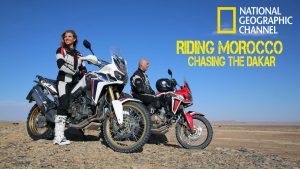 MayYi Lee, Vice President of NGC Regional Production & Development for APAC and Middle East, said, “We’re excited to have partnered with Honda on this ambitious television programme that fulfils the human need for exploration and uncovers a fascinating side of Africa. Viewers must tune in to Riding Morocco: Chasing The Dakar to witness Barriere-Varju and Csortan’s ultimate biking expedition and learn what extremes true adventurers will endure for the sake of self-discovery and making history. NGC is committed to continue producing quality programming that promotes the values of knowing more about the world and driving it forward.”