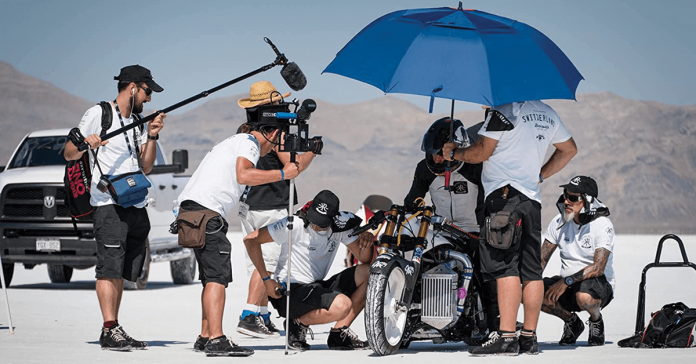 A butcher from a small village in Switzerland (Blenio) aims to beat the World Speed Record on the flats of Bonneville, Utah. Watch Online on DREAMRACER TV.

Here is why the story of ‘Blenio, Utah’ and documentary film is so good.

Tiziano Vescovi lives in small village of Switzerland (Blenio), he works as a butcher and despite have his first newborn on the way — something in his life is left unaccomplished — he dreams of adding his name to the World Record Books. Specifically… a World Speed Record on the famous Salt Flats of Bonneville in Utah, USA.

One small issue, Tiziano does not hold a motorcycle license!

We love this film because it follows the Dream Racer Spirit down to a T — that is — the ordinary man achieving the extraordinary simply by chasing his dream, with great determination and without a single ounce of self-doubt. Sounds familiar?

To bring more challenge into his quest, the motorcycle is built from scratch in a small garage by Hysni Jupa and the team manager Ralph Ruckstuhl. No big budget, just admirable passion from his friends that want to see this dream fulfilled.

Yes this film is incredible. This places at or near the top of my all time favourite documentaries. Must watch 100%.

In Blenio, Utah — the story is one of Tizano, his friends, and an small Switzerland village supporting him. They will all fail, or they will all succeed — a true emotional family affair.

Fantastically directed by Alberto Bernad with amazing cinematography from Patrick Botticchio and the entire Primitive Films crew, ‘Blenio, Utah’ is being distributed by DREAMRACER TV in collaboration with Radiotelevisione Svizzera (RSI) and the support of the Toronto Motorcycle Film Festival.