Sailing Around the World, One Ocean at a Time in documentary film ‘Between Home’

Tell someone that you are planning to cross an ocean in a 26-ft boat you’ve never seen, much less sailed, and they are likely to gently suggest that you are off your rocker. Especially when it is a 743 days / 18,000 miles journey across the treacherous waters of the Pacific and Atlantic Oceans – solo.

Sailing around the world, so many people would love to take that sort of challenge. It’s tricky psychologically, being in the middle of nowhere in a leaky boat. For Nick Jaffe he wondered “What am I going to do with my life?” his answer was “take it one ocean at a time.” 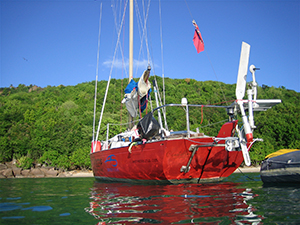 It all began in a Berlin bar where Australian ex-pat filmmaker, Jack Rath, met fellow Australian Nick Jaffe who had come to Germany to make contact with his familial past through his biological father, who died when Nick was a baby. As a way of connecting the two poles of his life, Nick, at only twenty-five, was planning to make a solo 26,000 km sea voyage from Europe back to Australia on a small 1972 British-made 26-foot Contessa sailboat. Nick had never sailed before in his life.

“I am out here for the freedom, for the ultimate experience, the lows, the highs, the adventure.”

Driven by an idealistic determination not to ‘sell out’ and settle down like his peers, 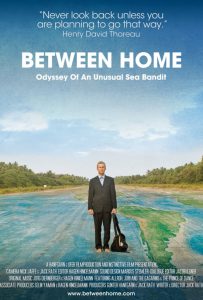 Nick, a whiz-kid computer programmer and artist, doggedly pursues his dream. He buys a second hand-boat in desperate need of repair he wants to sail around the world and lives from hand to mouth for months, setting out from England and relying on the kindness of strangers at every port along the way in an odyssey that turns into a life-defining three-year journey home.

Sinking deep into debt, Nick invites the world to experience his dream through a blog that will help fund his voyage. The generosity of people wanting him to succeed is overwhelming, their vicarious experience offering material and emotional encouragement, yet at the same time creating both pressure and doubt as Nick re-examines his motives.

“It’s tricky psychologically, being in the middle of nowhere in a leaky boat, and when you see a fish it’s the most exciting thing in the world.” 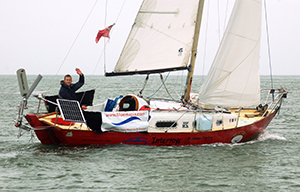 In his final leg home through the Pacific, an exhausted Nick has experienced love, loss, and even a tsunami. As he finally reaches journey’s end in Australia, there is only one person waiting. In the end, Nick’s story of isolation, adventure, doubt, and discovery leads him to a curious kind of closure.

Nick’s story is one we are all too familiar with, facing our own fears in search of a life lived to its fullest.

You can watch (stream or download) Nick Jaffe sailing around the world solo on Dream Racer in the Jack Rath 95-min Documentary Film ‘Between Home’.