Claudio von Planta brought a lot more skills than just being a cameraman, he is a documentary film maker, film editor, narrator, and movie producer, and military trained!

All of this whilst Claudio was busy filming while riding his very own motorbike.

The outcome was two epic voyages that entertained audiences across the world and opened up the adventure motorcycle market to bike manufacturers.

The three men who customarily were separated from everyone else were roughing it in some unimaginably secluded corners of the Ukraine, Kazakhstan and Mongolia. No doubt Ewan and Charley looked up to Claudio for his insights and advice.

The result is that Claudio von Planta films have stood the stand of time.

Dealing with Long Way Round opened another door for Claudio von Planta. With the stories around motorbike experiences being generally welcomed, Claudio wanted to use this and make a film around an issue exceptionally near his heart – the Kurdistan people. 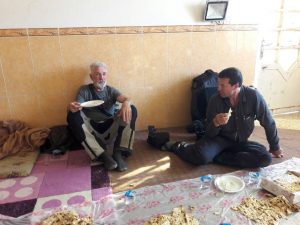 Claudio convinced long-time friend Billy Ward, a professional motorbike tour guide to follow him, on motorcycles and travel to the war ravaged Kurdistan part of Iraq.

Billy Ward was not so keen on the idea of travelling across ISIS territories at first but Claudio von Planta had 20 years of experience working in that region.

Both Claudio and Billy set out for an extraordinary riding adventure experience in A Kurdish Movie.

It was not all fun and games, of course. Billy and Claudio visited the ISIS frontline near 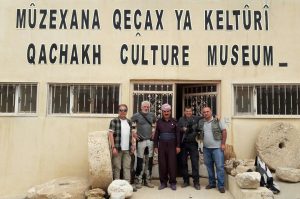 Mosul, met many refugees and also looked at a memorial in Halabja commemorating Saddam Hussein’s gassing of over 5000 Kurds in 1988. The oppression against the Kurds started 100 years ago after WW1, when the Kurdish population of 30-40 million people became divided among Turkey, Iran, Iraq and Syria. Ever since that time the Kurds have been caught in a territorial and religious war zone.

It is Claudio’s hope that professional guides like Billy will one day be able to bring motorcycle tourists to Kurdistan to help the Kurdish economy, and more importantly, shine a light on the beauty of the Kurdish people.

A Kurdish Movie was produced on a shoestring budget with crowd funding contributions, so when you rent or purchase A Kurdish Movie you will directly help Claudio von Planta recover the cost of producing this film.

The film follows an adventure ride of discovery crossing northern Iraq – the Kurdistan Region – riding across a war zone on Police’ borrowed motorcycles. But when riding to the Mosul front line and staying with the Peshmerga – Claudio and Billy are on edge!

In A Kurdish Movie it is YOU, who will be inspired!

Watch A Kurdish Movie on Dream Racer TV, stream or download to watch offline. Make sure you share this article to support films by Claudio von Planta.

You might also be interested in Jet Stream Superman and RWANDA-17: Healing a Nation, other documentary films by Claudio von Planta.