The Dakar Rally is a race of attrition, a race against time, a race against one-self. Forty to fifty percent of the competitors will be out of the race by the time they reach the final flag. By Christophe Barriere-Varju

The Dakar Rally is a race that needs studying and be understood. Personally I believe to master of this race is Stephane Peterhansel. Not only he has won the Dakar Rally a record of 13 times including bikes and cars, but in my view he is the only racer that consistently applies a very specific strategy to the race.

Watching him race over the years it becomes clear that his number one goal is the be number one at the end rather than winning stages. In fact he purposely finishes behind in some of the stages to allow him to win precious minutes the following day. He knows when to push, when to stay behind, when to stalk, and how to apply pressure with mind games. Truly a master to watch. This does not mean he is flawless, but his mistakes are rare such as the one he made on the first leg of the marathon stage today that is likely to cost him this year’s win.

However, the best ‘Dakar Strategy’ is the one that plays to your strength and allows you to make the difference whilst limiting the risk of a crash, mechanical damage or extreme fatigue.

Where do you make the difference?

Here are the areas a racer needs to concentrate to make the difference and minimize the risks of being on the wrong side of the statistics.

These are typically the areas a racer needs to concentrate on. The way a racer should focus on these stages generally starts the day prior and the anticipated time of arrival for work on the machines. Of course if you are part of a multi-million dollar team with dozen of mechanics by your side you can afford to push hard each day knowing that the next day will be tackled with a brand new machine, but for most everyone else the amount of parts and budget is not infinite.

So if you are in day 4 and you know that day 5 you will be at scorching temperature of 45 degrees for 700km, then take care of your body and machine on day 4 so that you can push hard and make the difference on day 5. 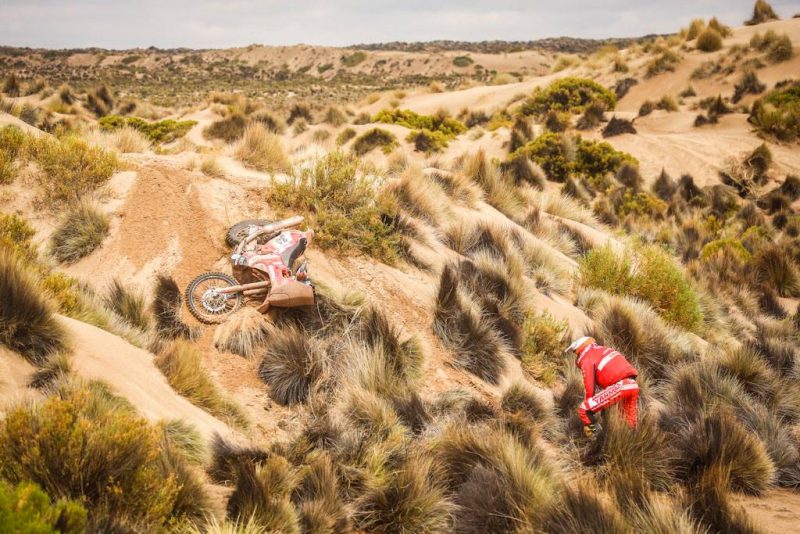 If day 6 and 7 are marathon stages, and day 6 are long easy gravel road allowing you to get up to 190km/h but the day after the marathon stage are 300-400km of rocky terrain, then take care of your tyres on day 6 and don’t burn your mousse or damage your tyres prematurely.

If you are not good at navigating at Sand Dunes, find someone slightly slower than you and follow him. Even if you lose 10 minutes that day, it is better than losing 1 hour because you got lost or fell in a sand bowl for not reading the dunes properly and used all your energy to get out of there – burning your clutch and overheating your engines.

I remember in the 2009 Dakar, I came up to a very steep sand hill that had been damaged by the cars already. A bunch of riders were stuck in the middle of it lifting bikes and getting exhausted. A bunch of riders were at the base watching others to find out the best line. I saw this and looked up at my roadbook to see if there was any waypoints we had to go through in the next 2-3 kms. They were none. So I went off-track where the dirt was a bit harder and zig zagged my way to the top using my riding skills.

When I easily got to the top of the hill there were a dozen riders up there with overheated engines, white smoke coming out of their radiators. I shook my head in disbelief and carried on. These guys had failed to look past their front wheels, and ahead of their roadbook.

Another time racing the Dakar Rally in Africa we had a really long special stage about 700 kms. I knew this was going to be a really long day and I had saved energy the day before. At the start of the special stage, as anticipated racers just took off like it was a 20 minutes motocross race. I let them go knowing that my strength was endurance and not sprinting. When we reached the 400 kms part I was in a really good rhythm and started picking them off one by one, it wasn’t hard, these guys where physically broken.

The point of all this, is that in the Dakar Rally it is a good strategy to sometimes follow, to finish slower on a day to let slower racers in front of you if you know that the next day will be spent in sand dunes, then without dust you will be able to see well ahead of you and slowly play ‘PacMan’ (a nickname I was given at a race in Brasil) on that day and gain a lot more time with that strategy.

If the next day is single dusty tracks, then you better lift your game up on the day prior to avoid spending the next in dust which is not only dangerous but slowly destroy your engine.

There are many combinations possible, and a racer needs to plan ahead and use the ones that play to their strengths and his capabilities – whether they are technical, physical, or navigation.