“When you’re chasing a dream, you can’t ever stop believing.” The already most awarded motorcycle film of all time Dream Racer, wins the heart of the audience in France and an incredible 10th International Film Award presented by MotoGP World Champion, Freddie Spencer.

It may not be winning an Oscar nomination or Oscar, but Dream Racer is a film that keeps on winning Film Awards around the globe and more importantly the heart of viewers. After earning a double Award in Canada at the Toronto Motorcycle Film Festival a few months ago, Dream Racer won its 10th Film Award at French Riviera Motorcycle Film Festival (2-4 March 2018) presented by none less than MotoGP Legend and 3-time World Champion, Freddie Spencer.

With Freddie Spencer being on stage addressing the audience inside the movie theater in Nice, France and Christophe Barriere-Varju (starring in Dream Racer) over in Australia, the Facebook Messenger Live Video came in announcing Dream Racer had won the Audience Award. Over a live video connection with the French Audience, Freddie stated “I really admired your perseverance on and off the track in Dream Racer, I can totally relate what you were experiencing. Dream Racer is truly an inspiring film.“

To which Christophe replied “I used to watch you race MotoGP, and never… never in my wildest dreams I would have thought I would be speaking with you today, thank you.“ Which then followed answering questions from Festival founder, Olivier Wagner and a Q&A session with the audience.

“Motorcycles are a powerful vector of freedom, whether it’s adventure, off-road riding, road racing or vintage bikes,” says FRMFF founder and president Olivier Wagner. “In addition to being a true motorcycle racing fan, I am a movie lover and amateur filmmaker. In fact, most of the movies I have made were motorcycle related. I decided to create this event because – having competed as a director in many international motorcycle film festivals – I have had the occasion to see great movies that nobody knows in France. And the best way to do so is to create my own festival because, to my knowledge, none exists in France.”

“I met Olivier Wagner during the Lisbon Motorcycle Film Fest last year along with Caius Tenche Director of the Toronto Motorcycle Film Festival (Canada), it is refreshing to meet people doing things for the love of their passion — nothing more, and to be able to share Dream Racer message with audiences around the world is really what it is all about” says Christophe Barriere-Varju.

Out of Competition Movies 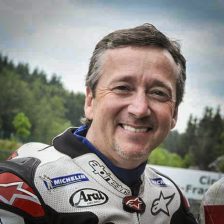 Freddie Spencer, President: American MotoGP pilot, 3-time world champion. “Fast Freddie” was the youngest world champion, a record only recently broken by Marc Marquez. Freddie Spencer is the only MotoGP racer to have won both 250cc and 500cc races, and world title in the same year, 1985. His book ‘FEEL, My Story‘ is a search for the personal fulfilment that comes through finding your purpose, Freddie’s story is a universal one. In its message of hope, Feel transcends its genre to offer a story for everyone. Part thriller, part philosophical self-exploration, it is a remarkably insightful account of what it is like to have it all, but wonder why. 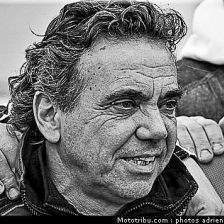 Eric Saul, Professional Grand Prix racer, founder of I.C.G.P.: Original member of the French generation of Grand Prix racers who shone brilliantly in the Continental Circus, Eric Saul is the founder and organizer of the famous International Classic Grand Prix (ICGP), whose aim is to bring together former world championship riders with their vintage machines, thus allowing the public to relive unforgettable moments from this magical era. An era in which the Grand Prix had starting grids counting up to 36 pilots in 6 different categories. 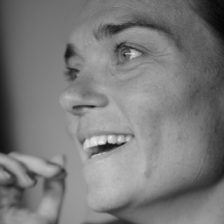 Lydia Truglio Beaumont, Racer, Trainer & Journalist: Lydia really is a girl apart. She defines herself as Founder of the Mag’Motardes, a graduate educator, and a pluri-disciplinary amateur rider. That’s what she is and her excellent blog that highlights women in the world of motorcycle is really worth a read. Her participation in the “Africa Eco Race” which will provide support to children’s associations in Morocco, Mauritania and Senegal. 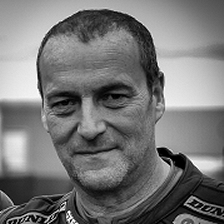 Didier Constant, Founder & Editor-in-Chief of the Canadian magazine “Motoplus.ca”:  Created in March 2008, the online magazine “Motoplus.ca” is currently in its tenth year of publication. As he writes after Sacha Guitry: “to please everyone, is to please no one, and it would be an insult if one sought everyone’s approval.” Didier understood this a long time ago. One touches people’s hearts when one stops trying to seduce at all costs. Didier came from the “Belle Province” (Québec) especially for this event.

Gérard Delio (Photo Press), Professional Sports Photographer: If there is a familiar name in the French motorcycle racing community, it is that of «Photo Press». Gérard Delio has been haunting the circuits since the 1970s. Today he still immortalizes riders in action. There is not a single racer who does not have a picture of him taken by Gerard. If you’re looking for an archived photo, he’s your man.

Created by motorcycle enthusiast Olivier Wagner, the French Riviera Motorcycle Film Festival spirit is the same as biker spirit. It is based on fraternity, common mind and the desire to share one’s passions, and to watch a selection of films about motorcycles from around the world, during the first edition of the “French Riviera Motorcycle Film Festival“. The festival has been supported by VILLE DE NICE, The Nap Hotel, Moto Expo 2018, Club Presse 06, Esprit Motard 06, Laurent Lachkar Ducati, NICE PREMIUM Motors BMW, Honda Werther, Indian Motorcycle, Harley Davidson, and Jacky Onda Yamaha.

The film Dream Racer has been sold to Discovery World, FOX, and featured in international in-flight movies at Qantas, Virgin, and Emirates.

Dream Racer is the most awarded motorcycle film of all time and has now won a total of 10 International Awards at Film Festivals in Los Angeles, Barcelona, Milan, Marina del Rey, New York, New Delhi, Oregon, Toronto, and Nice, France. Dream Racer has also been nominated in Austria, and Australia for Best Edited Film.

Dream Racer is available to audiences worldwide on Blu-Ray, DVD, and Online via Video On Demand including subtitles options in Spanish, French, Italian, Portuguese, German, and Russian from our Official Website.